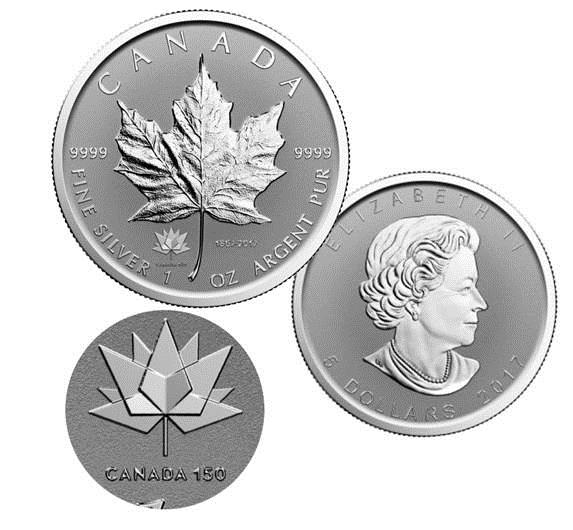 The Royal Canadian Mint is proud to celebrate Canada's 150th anniversary — a once-in-a-generation event for all Canadians. Anniversaries are a special time to reflect on one's history and celebrate all that has been achieved. 2017 is the year we celebrate everything it means to be Canadian: the wonders of our country, our achievements, character and passions — and the vision we have for our future.

In honour of this historic occasion, we are introducing a new Silver Maple Leaf coin featuring the Official Canada 150 logo. This special coin also features the dates "1867–2017" to further commemorate the anniversary of Confederation in Canada.

 The Royal Canadian Mint's bullion coins are sought after by investors and collectors around the world for their exceptional beauty and purity.

The reverse design features the bullion coin's iconic Silver Maple Leaf in a reverse proof finish. Beneath it to the left, the privy mark celebrates the 150th anniversary of Confederation in Canada with the Official Canada 150 logo. Ariana Cuvin of Toronto (Ontario) transformed a maple leaf into an eye-catching mosaic representing Confederation. The four diamond shapes connected to the stem symbolize the original provinces that formed Confederation in 1867, while the remaining nine shapes represent the provinces and territories that followed. Combined, they form the iconic symbol that represents unity, freedom and peace for people around the world—an ideal that is now 150 years proud! To the right of the leaf's stem, the dates "1867–2017" further commemorate the special anniversary. The obverse features the effigy of Her Majesty Queen Elizabeth II by Susanna Blunt.