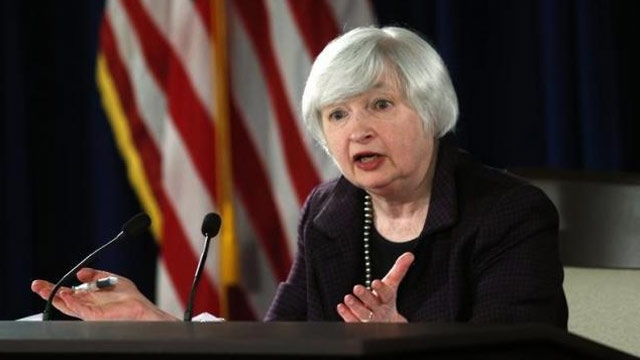 The first trading day of the week was very lackluster with little to move the currency markets either way due to the Easter holiday break. This only helped to raise the anxiety level of traders as they waited for Tuesday's speech at the Economic Club of New York by Fed Chair Janet Yellen. The question on everyone's mind was did she mean to sound as dovish as she did in her post-FOMC press conference in mid-March, especially since various Fed presidents had taken a more hawkish tone since then. The answer is yes, she absolutely meant to sound dovish.

The third paragraph of her speech is very telling, it reads as follows: "In my remarks today, I will explain why the Committee anticipates that only gradual increases in the federal funds rate are likely to be warranted in coming years, emphasizing that this guidance should be understood as a forecast for the trajectory of policy rates that the Committee anticipates will prove to be appropriate to achieve its objectives, conditional on the outlook for real economic activity and inflation. Importantly, this forecast is not a plan set in stone that will be carried out regardless of economic developments. Instead, monetary policy will, as always, respond to the economy's twists and turns so as to promote, as best as we can in an uncertain economic environment, the employment and inflation goals assigned to us by the Congress." In other words, the Fed should proceed with caution and with a gradual approach in adjusting policy.

Ok, so Yellen stressed a "gradual approach" to Fed policy and, just in case the economy goes sideways or worse, the Fed is prepared to employ additional "money" printing (QE): "Even if the federal funds rate were to return to near zero, the FOMC would still have considerable scope to provide additional accommodation. In particular, we could use the approaches that we and other central banks successfully employed in the wake of the financial crisis to put additional downward pressure on long-term interest rates and so support the economy--specifically, forward guidance about the future path of the federal funds rate and increases in the size or duration of our holdings of long-term securities. While these tools may entail some risks and costs that do not apply to the federal funds rate, we used them effectively to strengthen the recovery from the Great Recession, and we would do so again if needed." Really, we are back to this again. How successful was QE anyway? Not very, considering QE1 was followed by QE2, Operation Twist, and QE3.

Here is another unsettling part of the speech: "The FOMC left the target range for the federal funds rate unchanged in January and March, in large part reflecting the changes in baseline conditions that I noted earlier. In particular, developments abroad imply that meeting our objectives for employment and inflation will likely require a somewhat lower path for the federal funds rate than was anticipated in December. Given the risks to the outlook, I consider it appropriate for the Committee to proceed cautiously in adjusting policy. This caution is especially warranted because, with the federal funds rate so low, the FOMC's ability to use conventional monetary policy to respond to economic disturbances is asymmetric." So what you're telling us is that the Fed's "data dependency" will now include data like Japanese inflation, European GDP, and Chinese PMI – you get the picture.

It appears that Janet Yellen is not only dovish but she is a lot more dovish than anyone previously thought. To illustrate this point, the ninth footnote in the text of her speech stated "uncertainty and greater downside risk" when the Fed's policy rate is so close to zero "call for greater gradualism."

At the time of this writing, fed funds futures traders have revised down the implied probability of a June rate hike to just 26%, and "only" a 66% chance of another rate hike at all this year.

In the currency trade, it's no surprise the the USD took the brunt of Yellen's dovishness as it lost ground to all the major currencies. During the past week, multi-month highs for the AUD, NZD, and CAD were recorded. The big question is will the gains in commodity currencies last – investors are seeing the spike highs and the natural inclination is to think of exhaustion followed by reversals.

In other parts around the world the yen is the best performing currency in Q1, which is surprising since the Bank of Japan decided to up the ante with the introduction of negative interest rates. The GBP was in last place which is not surprising as the currency is being weighed down by the uncertainty of Brexit. To underscore this point, the global manufacturing PMIs were released on Friday and the only one that missed its mark was from the UK where the PMI reading printed at 51 versus 51.2 forecast. By the way, the PMI for China surprised to the upside with manufacturing activity expanding for the first time in 8 months – does this mean Yellen will raise rates – sorry we're confused.